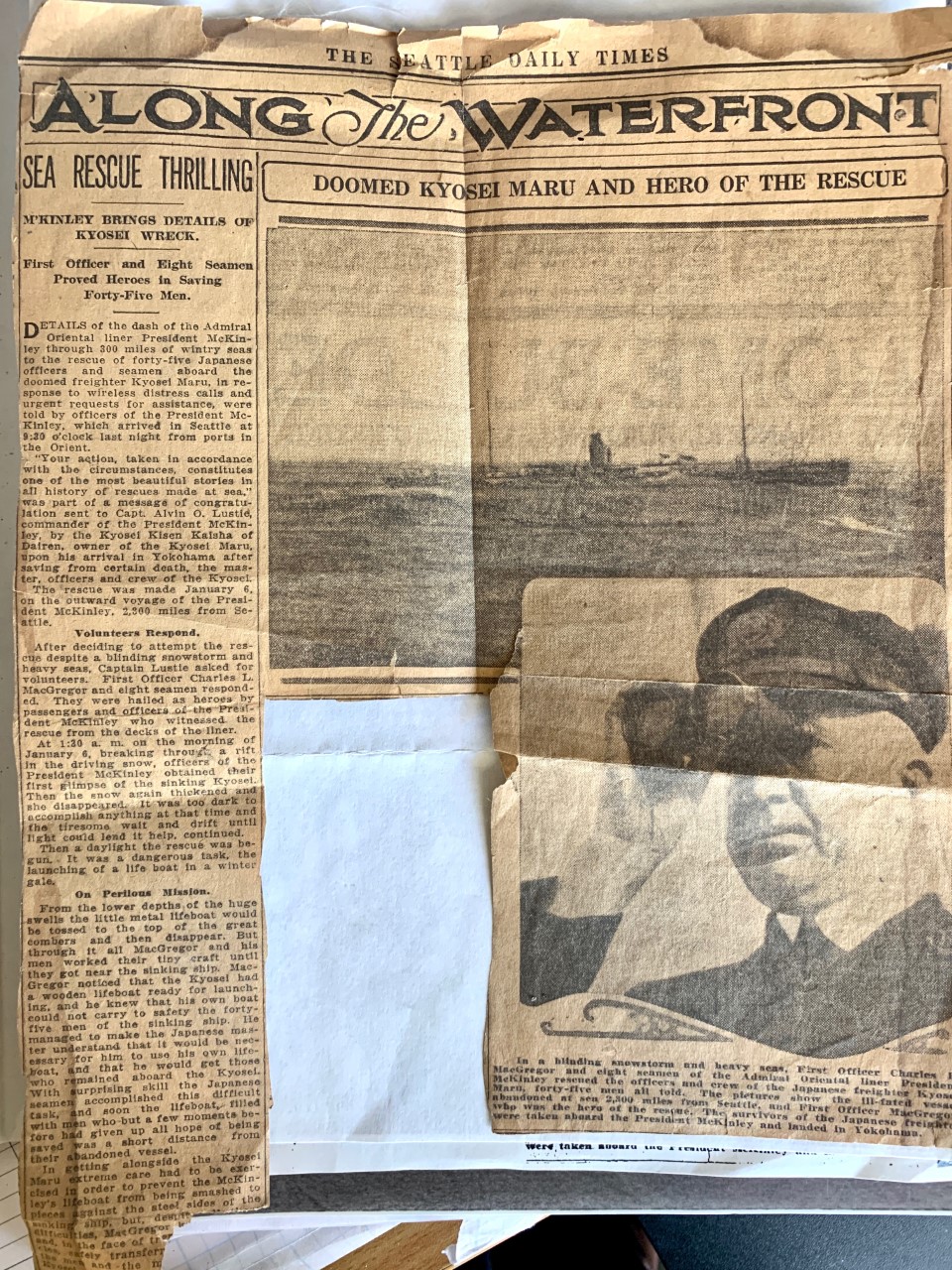 The daring rescue story was printed in the Seattle Daily Times with a photo of First Officer Charles MacGregor, and in several other newspapers. 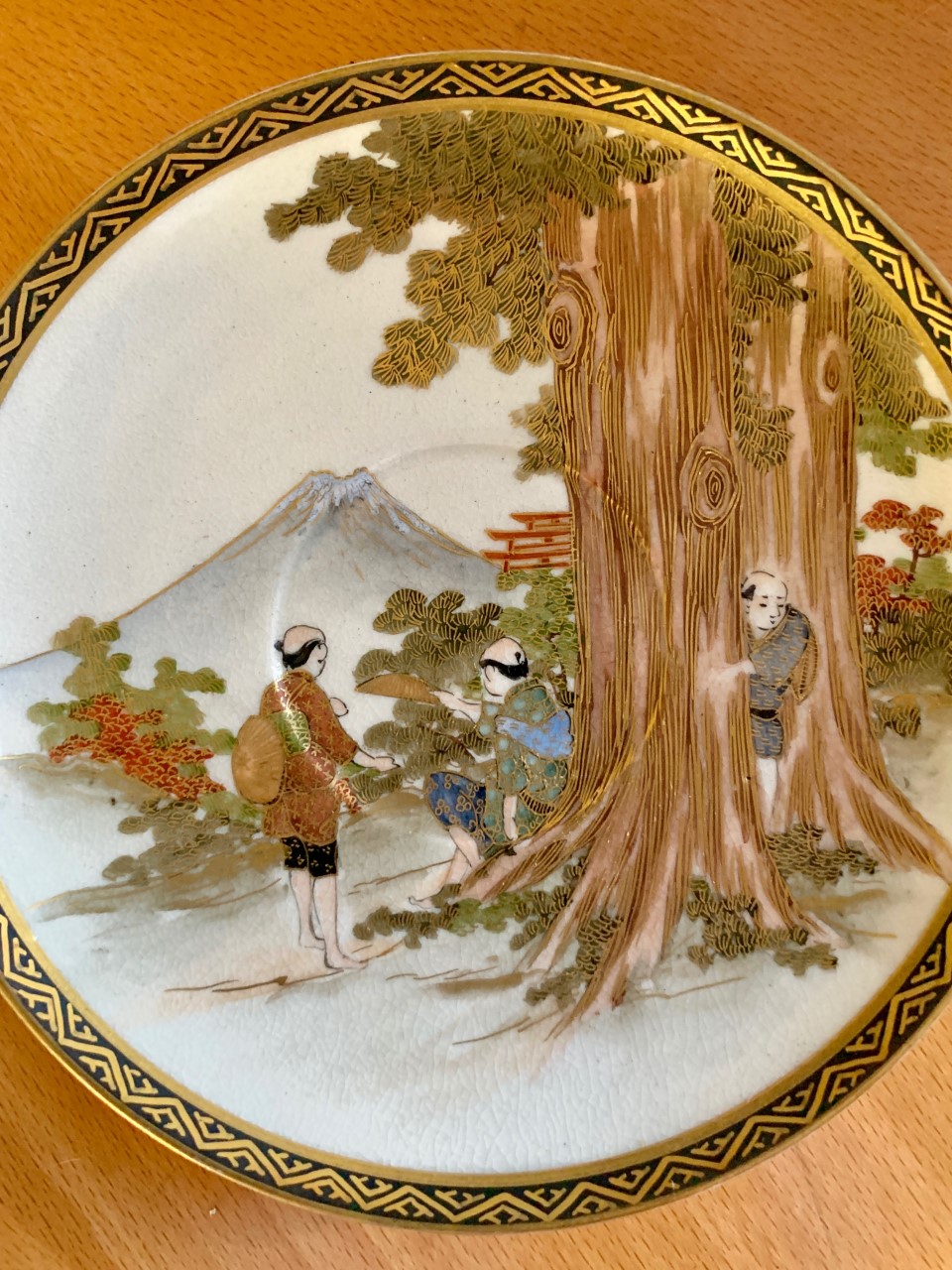 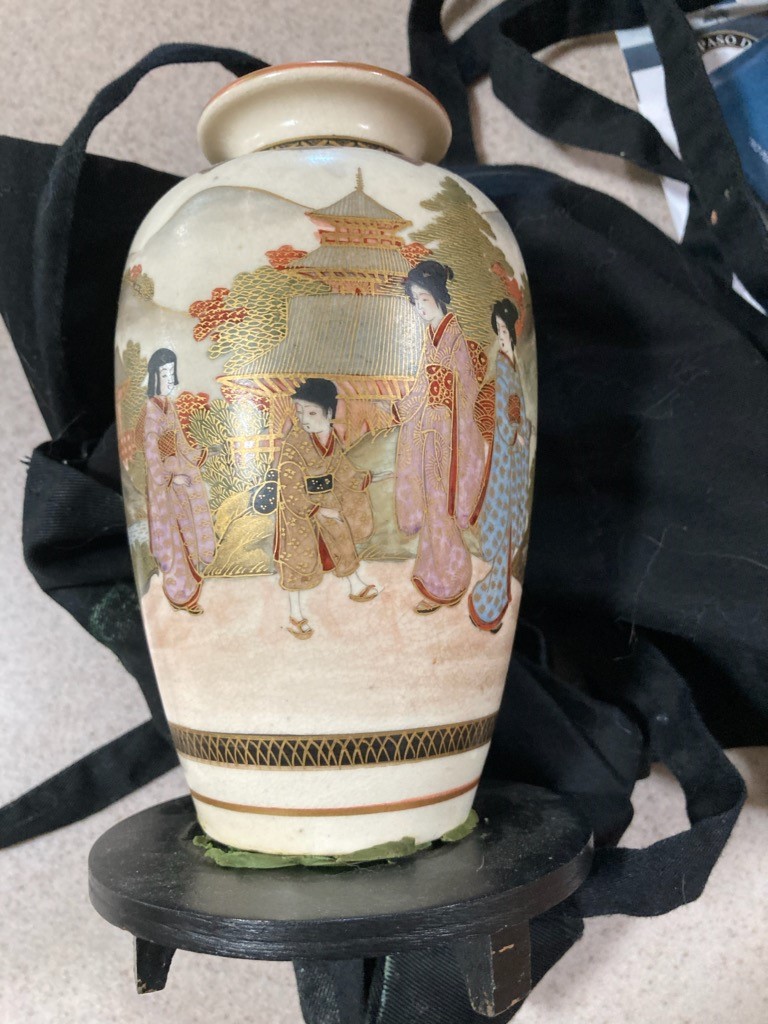 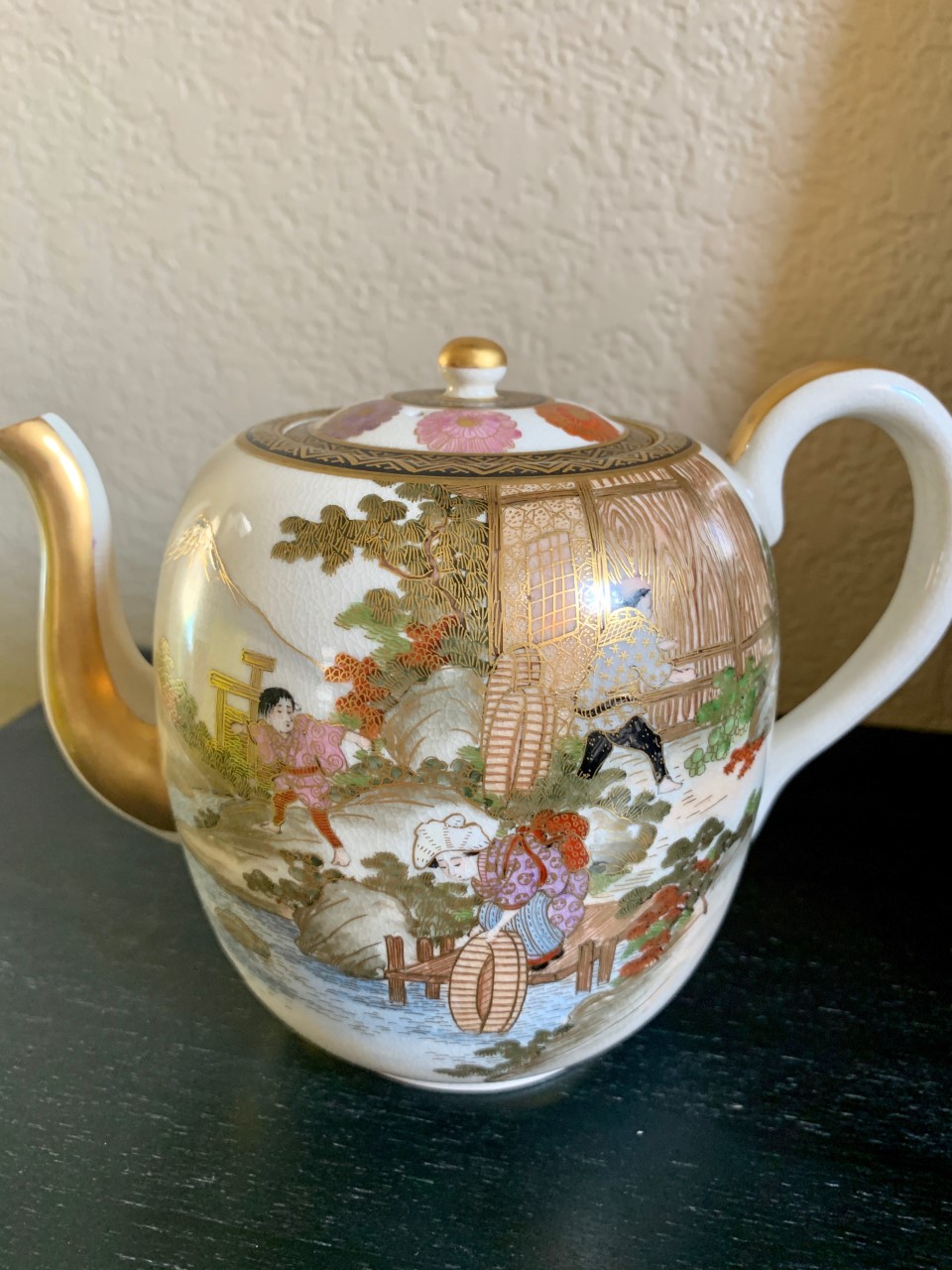 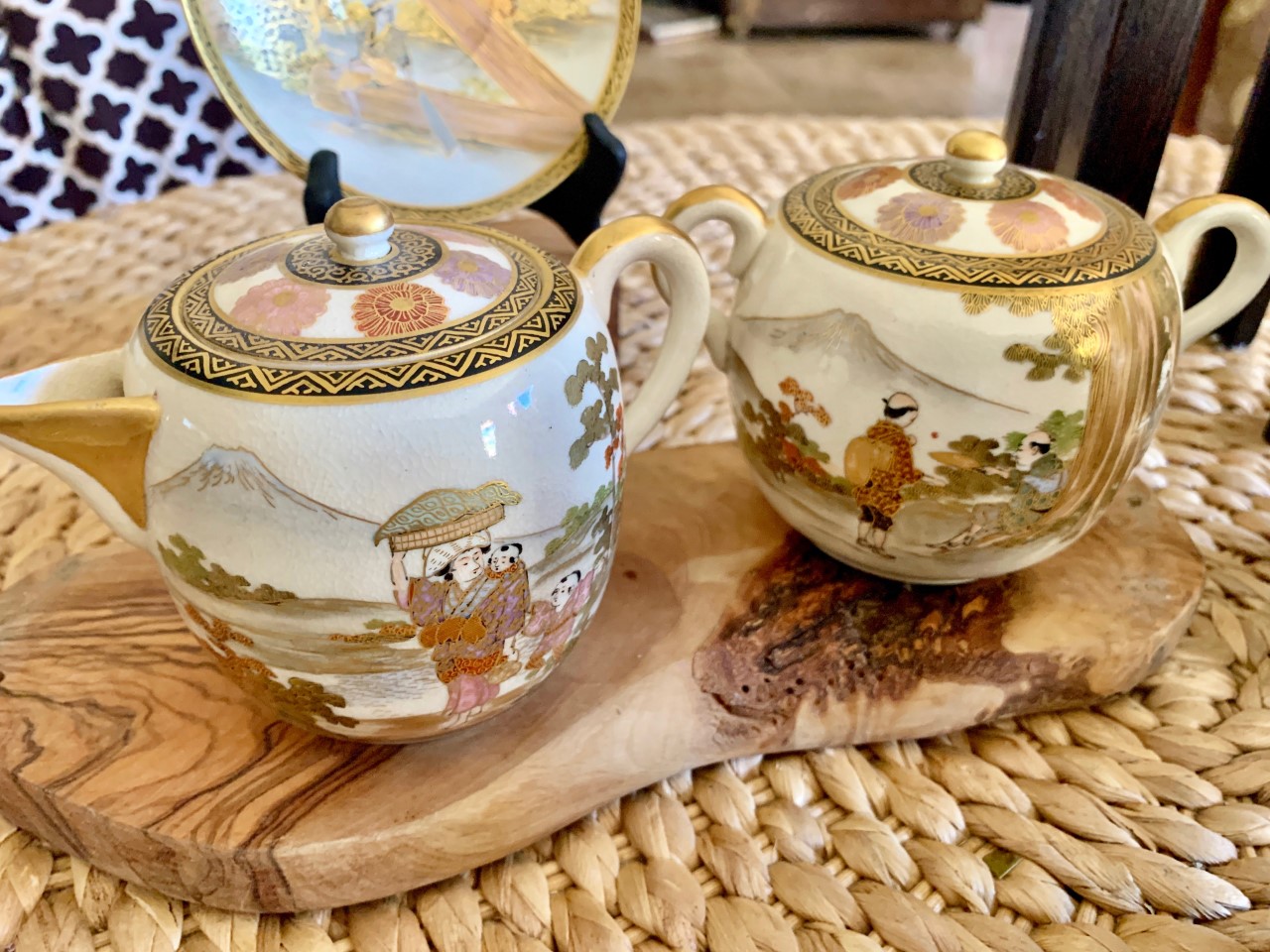 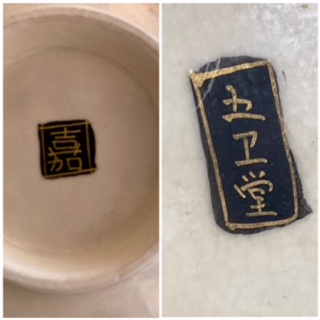 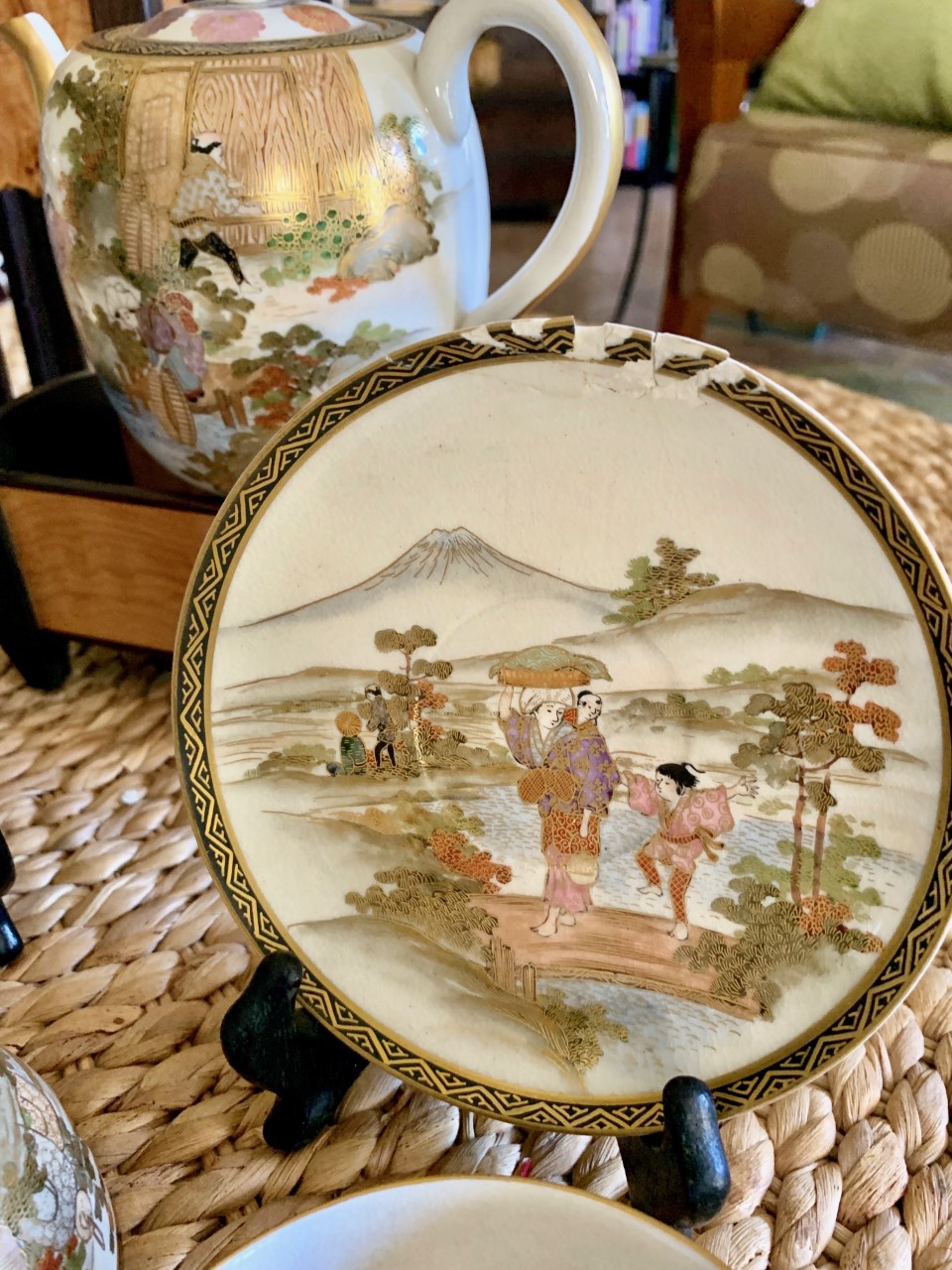 Unfortunately, many of the pieces toppled and broke during the 1978 Santa Barbara earthquake. They were carefully glued back together by Mary’s mother—some better than others. 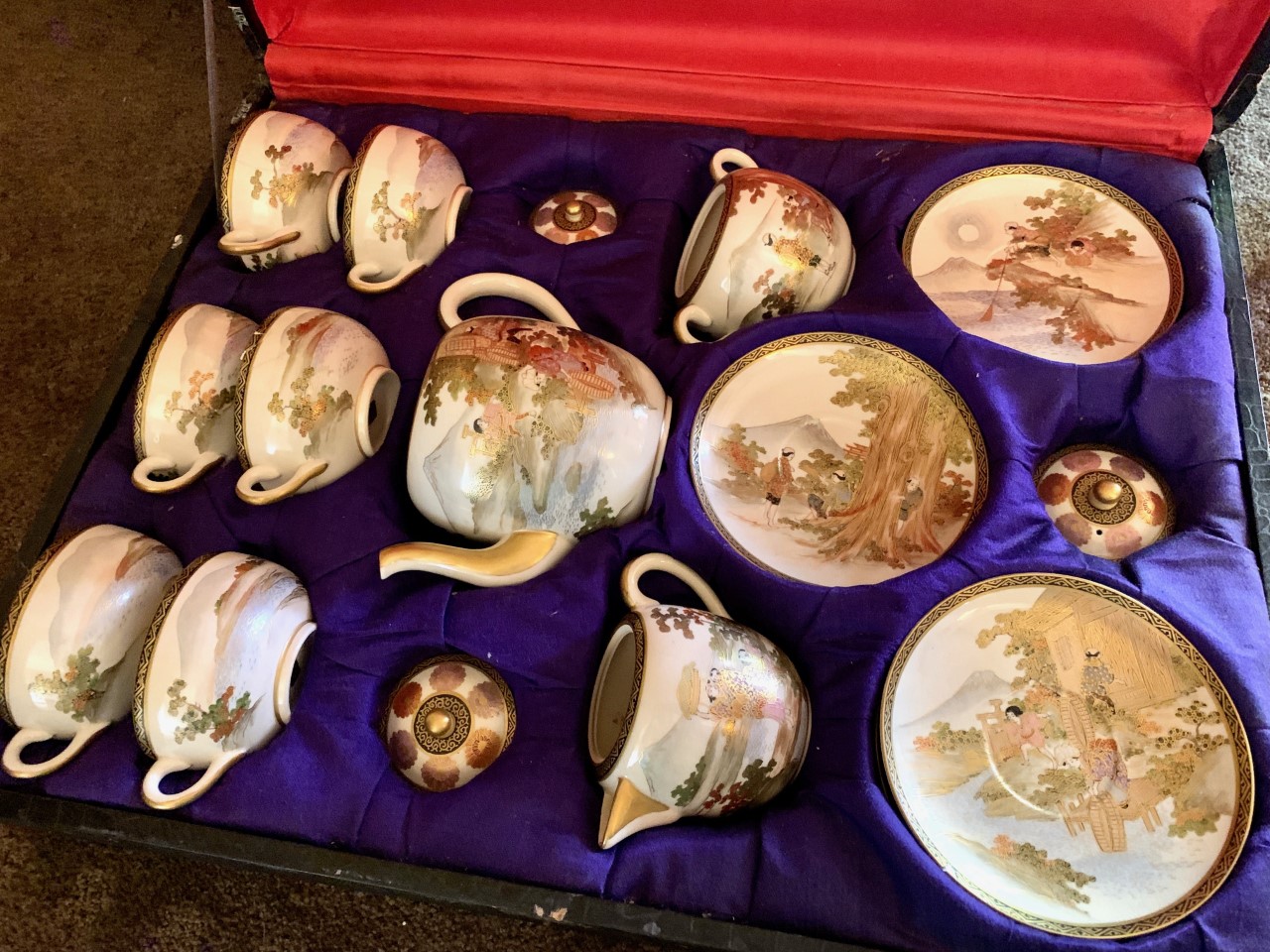 They have remained nested in their satin-lined box since the 1978 Santa Barbara earthquake.

Satsuma with a story: special pieces from private collectors.

Visitors of Satsuma-Database regularly send us examples from their own collection. Sometimes there are surprising pieces of very high quality—such as the Narususe Seishi vase and tray by the same maker that we’ve profiled on previous pages. Although the quality of some pieces is high, their provenance is often murky since so many are purchased from auctions or art dealers.

We occasionally come across pieces with a traceable provenance because they’re cherished family heirlooms. I am especially fond of such Satsuma pottery because the attached history appeals to my imagination.

The history of Satsuma and other antiques is not limited to the product’s intrinsic value, but also how it ended up with the current owner.

Here is such a tale. Mary MacGregor of La Quinta, California, sent us a story of her Satsuma tea set and vase inherited from her sea-captain grandfather, Charles Lewis MacGregor. He received the items in gratitude for saving the lives of 47 Japanese officers and sailors aboard the sinking freighter Kyosei Maru in 1924.

The vase and the tea set are not from the same maker, but are almost identical in style and design. The vase is signed with 五ヱ 堂, which assumably can be pronounced as Goeido. The tea set is signed with 嘉, which can be translated as Ka, a company that worked from the Meiji period until WWII. The style and manner of decoration of both pieces are typical of the Taisho period (1912-1926). This kind of work was made in many small to large companies by skilled artists and was mainly produced for export to the West or for westerners visiting Japan. It was deliberately crafted to evoke sentimental images of traditional Japanese scenes—landscapes with kimono-clad females, temples and a prominent Mount Fuji.

The images on the beautiful tea set depict daily life in the countryside in old Japan and would have appealed to a wider buying audience. Serious Satsuma collectors prefer more unusual and less commercial designs.

Although finely wrought, the intrinsic value of the vase and tea set lies in their century-old story.

That story commenced January 5, 1924 when the liner President McKinley—on its way from Victoria, British Columbia to Yokohama—received a distress call from the Japanese freighter Kyosei Maru, taking on water in a fierce winter gale.

Although the President McKinley was further from the sinking ship than the Empress of Russia, it arrived first on the scene. Blinding snow and heavy swales prevented immediate rescue and the crew impatiently waited until daylight before proceeding.

Captain Lustie asked for volunteers. First Officer MacGregor and eight seamen quickly stepped up. While passengers watched from the deck, the men launched their small metal lifeboat and ploughed the rough seas to the doomed ship. MacGregor noticed the Japanese vessel had its own wooden lifeboat and communicated to the captain by hand signals that they should divvy up the crew between the two boats. The plan succeeded in the midst of roiling seas and both boats deposited their human cargo on the American vessel.

Passengers and officers immediately hailed MacGregor and his sailors as heroes for their courageous effort.

“Your action, taken in accordance with the circumstances, constitutes one of the most beautiful stories in all history of rescues made at sea,” said Kyosei Kisen Kaisha, owner of the sunk freighter.

The daring rescue story was printed in the Seattle Daily Times with a photo of First Officer Charles MacGregor, and in several other newspapers. It was also recorded in the Congressional Record, volume LXX-part3, printed in Washington 1929.

The Satsuma tea set and vase were ceremoniously presented to MacGregor by either the Japanese government or the Kyosei Kisen Kaisha, and became a treasured fixture in the MacGregor family. They were passed down to eldest son, Charles MacGregor, and the delicate, crackle-glazed pieces were often displayed. Unfortunately, many of the pieces toppled and broke during the 1978 Santa Barbara earthquake. They were carefully glued back together by Mary’s mother—some better than others—and have remained nested in their satin-lined box since then.

These early 20th century Satsuma pieces, though not rare or especially valuable, are treasured as beautiful mementos of a patriarch’s long-ago heroism.

We’re happy to share with you this story, in acknowledgment of the courage, demonstrated by nine brave men, a long time ago, far away.